Speaking at the signing ceremony on Wednesday October 6, NBC’s managing Director Theobald Sabi they have decided to sponsor the league as part of their involvement in sports development and other activities in the country.
Sabi said that Sh2.5 billion is meant for the 2021/2022 season despite the fact that they have signed a three-year contract with Tanzania Football Federation (TFF).

The following below is the Table wiht 16 teams from the top to the bottom:-

The following below are date, time and match of Vodacom Premier League 2021/2022. Get also all Tanzania Premier League fixture for season of 2021/2022 in attached images below:- 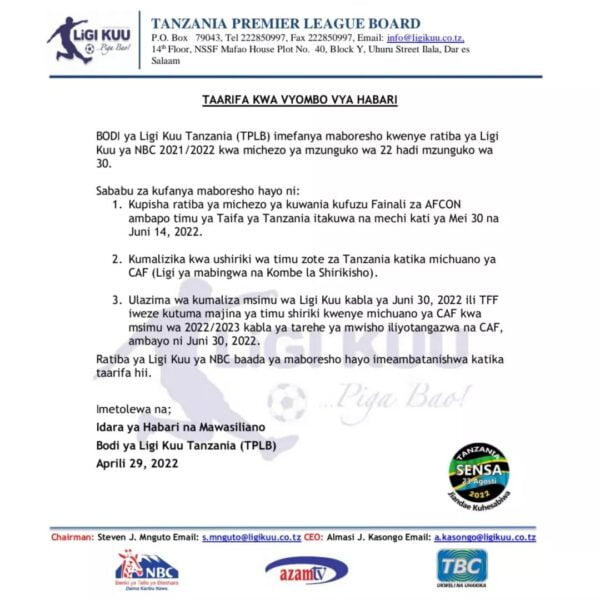 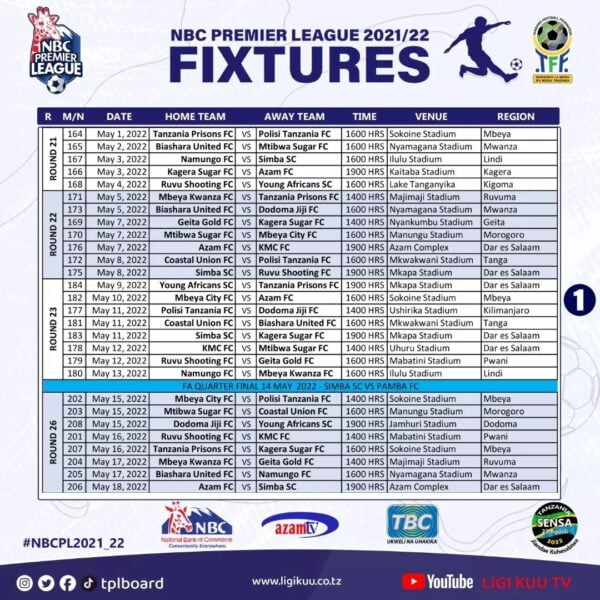 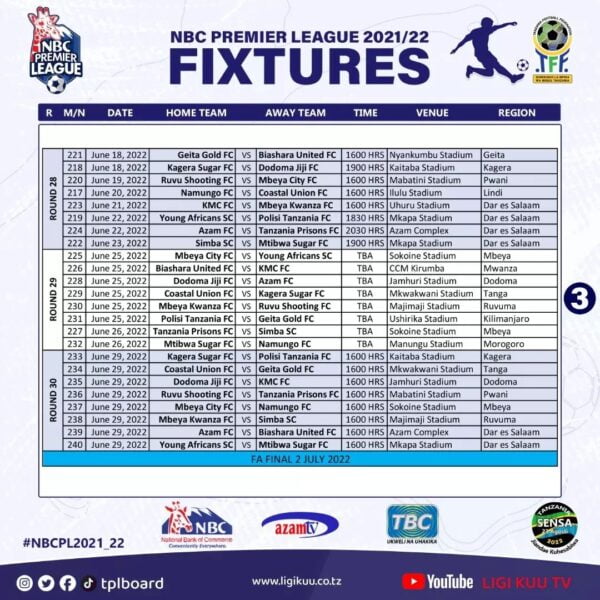 Matokeo Ya Leo Ligi Ya NBC

The Tanzania Mainland Premier League (Swahili: Ligi Kuu Tanzania Bara) is the top-level professional football league in Tanzania and is administered by the Tanzania Football Federation. The league was formed in 1965 as the “National League”. Its name was later changed to the “First Division Soccer League”, and to the “Premier League” in 1997
National Bank of Commerce (Tanzania), whose full name is National Bank of Commerce (Tanzania) Limited, sometimes referred to as NBC (Tanzania), or as NBC (Tanzania) Limited, is a commercial bank in Tanzania.

As the NBC Premier League is getting closer to an exciting fina­le, I wish to extend our sincere gratitude to everyone who made it possible. The financial and non-fi­nancial gains that the league has collectively yielded, especially to those in the football value chain, have surpassed our expectations.

What started as a commercial decision resulted in a cross-sec­toral empowerment platform that touches and improves lives ami­cably. Today, we stand tall, advo­cating our overriding objective: bringing possibilities to life.

On behalf of everyone at NBC, I wish to extend our special appre­ciation to the Government of Tanzania under Her Excellency President Samia Suluhu Hassan for unparalleled support, the fans for their unwavering passion, and appreciably, to the Tanzania Foot­ball Federation (TFF) for trusting and endorsing us to be their part­ners. Asanteni sana.

On a similar note, I wish to bring you up to speed on the recent val­ue addition to the league players’ insurance covers. Thanks to our new agreement with TFF, we can now offer life and health insur­ance covers to all the NBC Premier leagues players, club staff, and their immediate families. Special thanks to our partners, Sanlam and Britam Insurance companies, for bringing these arrangements to life.

NBC Premier League is beyond football

The league has evolved into reliable machinery for socio-eco­nomic empowerment through job creation (direct and indirect), generating tax revenue, advo­cacy for the national financial inclusion agenda, and a trusted grapevine for supply chains’ trick­le-down effects.

The 16 teams in the NBC Pre­mier league play a vital role in their local communities ‘socio-economic well-being. The local business enjoys heydays of sales on match days. Reports revealed that a Yanga and Simba match a few years back, attended by almost full capacity of 59 thou­sand plus fans, yielded revenue of TZS 546million from match tick­et sales alone, throwing in mil­lions to the Tax basket.

There are also over 3,000 direct employments for players, refer­ees, paramedics, and technical benches. With the country’s aver­age household size standing at five and above, the league stands out as a tool for poverty reduction, improving household welfare, and improving living standards.

Millions of other indirect employments are created in the supply chains in merchandise, broadcasting, distributors, food vendors, sports pubs, transpor­tation, betting, and accommoda­tion.

NBC Bank is also proud to use this platform to support the Gov­ernment’s efforts in pushing the financial inclusion agenda. We have connected to more custom­ers and prospects to whom we previously had little access. Foot­ball stands out as an essential platform for reaching both the unbanked and the underbanked.

The NBC Premier League com­prises a mix of international stars and elite homegrown talents. The continent’s football federa­tion (CAF) ranks our league as the eighth-best. At the same time, Yanga and Simba command the highest club followership in East and Central Africa.

It is time to change the for­eign fellowship into income. Sports-tourism. Value addition could be game-changers through properly coordinated, matchday hospitalities and options to vis­it tourist attractions. In 2019-20 alone, the English Premier League garnered USD 602mil­lion from international fans traveling to games. Let that be our blueprint.

Our country’s proximity and presence of big names foreign stars playing in our league should provide us with the best-fit tailormade propositions and competitive advantage.